The first Methodist circuit rider to arrive in Enid was the Reverend O. R. Bryant. This courageous young minister preached to a small congregation of early settlers on Sunday, September 17, 1893, the day after the great run into the Cherokee Strip. The service was held on the courthouse lawn and was the first Protestant sermon delivered in Enid. This was the beginning of the First Methodist Church in Enid. 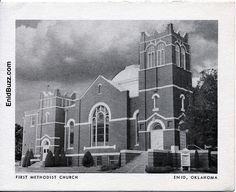 At first, services were held in a tent, then in the Opera House, and over a store building where the seats were planks laid on beer kegs. This hall was also used as a theater, for lectures, the city council, and other meetings. Later a store building on the ground floor was used, then a room over a hotel known as Fuqua Hall, and again an old store building. With $450, a building at the corner of North Grand and West Maple, known as the “Emergency Hospital” was purchased. Hard work by willing hands converted this dingy structure into both a living quarters for the pastor and his family and a place for worship. The renovated “Emergency Hospital” immediately proved inadequate.

On October 7, 1898, the Reverend M.S. Hard of Kingston, Pennsylvania, Assistant Secretary of the Church Extension Society, laid the cornerstone for a new church. Still another temple of worship was needed by the Methodists of Enid. It was begun March 27, 1909, when the Ladies of the Aid Society threw the first shovel of earth for the excavation. The contract had just been let to D. C. Bass for $35,337, and the cornerstone was laid May 30, 1909. The dedication ceremony of an Education Building was conducted Sunday, June 10, 1951, by Bishop W. Angie Smith, who also delivered the Message.

On July 13, 1958, a service was held for the breaking of ground for our current sanctuary. Ground was broken for the Christian Fellowship Education Center on October 10, 1965.